Tribe participated in a video commemorating Amnesty International’s 50th Anniversary. The film, called “One More Voice,” speaks to the power of a collective voice against injustice of all types. For the campaign, Amnesty called for production companies from across the globe to donate their efforts to this cause. So it was no surprise when the San Francisco-based agency Citizen Group, who was responsible for the production of the final film, invited the members of the International Quorum of Motion Picture Producers (IQ) to co-produce “One More Voice.”

IQ member Lukas Skalnik facilitated the connection of IQ’s filmmaking fellows who made up more than three quarters of all the filmmakers credited. IQ members added faces, dialects, and “voices from” over 30 different languages across six continents.

As IQ’s President and Tribe’s chief storyteller, I took advantage of the vast diversity of people in New York City when filming Tribe’s segments. Actors donated their time and effort to the project to add their voices—in Hebrew, Polish, Afrikaans, Lebanese, and of course in English.

Oscar winners Meryl Streep and Hans Zimmer also donated their talents to the project—Zimmer with a powerful score and Streep to provide her voice-over, ending the film with the simple yet powerful message: “Together, we are unstoppable.” In its finished form, the film is emotional, evocative, and all together inspiring.

Knowing that great things are possible when you work together, Citizen Group again invited Tribe Pictures and other members of IQ to participate in another globally sourced project called What I See. Our own Lori Schmon was selected as one of ten directors chosen to collaborate in this part art, part cultural anthropology project that seeks to open a deeper and broader dialogue around women’s self perception and self expression. The What I See website is an active online forum where women from around the world are encouraged to participate.

Over the course of two days, Lori and her crew, including Alexandra Beni and Felicia Jamieson, also of Tribe Pictures, interviewed 8 extraordinary and unique women from the NY/NJ area. The interviewees included a construction worker, religious sister, dancer, street musician, fashion designer, small business owner, film writer and an artist dealing with autism. Each woman was asked to reflect to questions, such as: ‘What do you see when you look in the mirror?’; ‘What did you see at different stages of life?’; and ‘What do you look forward to seeing in your lifetime?’ 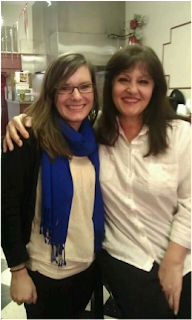 The women shared personal stories about their childhood, family life, and obstacles they have overcome or are presently dealing with. The film will be featured on the website, affiliated blogs, and museum installations, and potentially at part of a short-form documentary series to be shown at film festivals.

Just as members of a tribe work together to advance a common cause, so do the supporters of Amnesty International and the What I See project. We look forward to participating in future collaborations and would like to give a special thanks to IQ which makes many of these projects possible. For One More Voice, 16 members’ footage was used in the final film, and for the What I See project, five of the ten directors chosen were introduced to the project through IQ. See below what IQ Members along with Tribe participated in One More Voice and/or What I See.