Connecting Leaders with Students with Lafayette at Lehigh Matchup

CHATHAM, NJ – November 24, 2014 – Fans tuning in to the Nov. 22nd CBS telecast of the 150th anniversary football game between rivals Lafayette College and Lehigh University got a glimpse of how Lafayette’s community is living connected and leading change via three thirty-second ads written and produced by Tribe Pictures. They appeared on the giant video screen at the game’s iconic venue, Yankee Stadium in the Bronx. 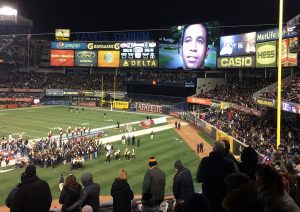 Tribe’s commercials aired during coverage of what’s been dubbed Rivalry 150. Since 1884, Lafayette and Lehigh have faced off on the gridiron more than any other colleges in US history. The spots will eventually be featured on the college’s campaign web site, liveconnected.lafayette.edu.

The spots, titled “Diversity, “Engineering” and “Classroom,” are a key element in an integrated effort the Chatham, NJ-based company has produced as part of the school’s “Live Connected / Lead Change” fundraising campaign. They highlight major achievements of Lafayette alumni from the past and the present, depicted in both still and motion footage projected onto buildings on the Lafayette campus that are viewed by present-day students.

In addition to the broadcast ads, Tribe produced a six-minute film that paints a picture of an innovative liberal arts college producing passionate, committed leaders. The film builds its narrative around in-depth interviews with students, alumni, faculty and administrators, who help convey Lafayette’s story in compellingly human terms. Tribe also produced three video modules that focus on the pillars of the campaign. 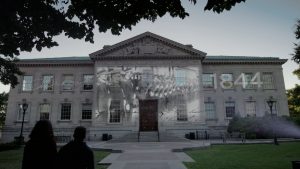 Tribe worked closely with Lafayette’s marketing team, as well as with its communications consultants, Steege Thomson Communications, on both the broadcast spots and the campaign films. The projects were an outgrowth of Tribe’s earlier work for Lafayette. Tribe, which has extensive experience working with higher education institutions, produced a six-minute film highlighting the college’s endowed professor program back in 2011.

“Lafayette was a great partner to work with,” says Tribe Pictures Founder and CEO Vern Oakley, who served as Creative Director on the ads and the campaign films. “They shared the same goal of moving people with video, and allowed the time for us to get inside the heart and soul of the institution.” 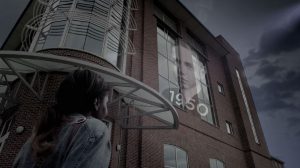 One of the key challenges Tribe faced was the need to develop a 360-degree platform for the school’s communications, one that could prove persuasive in a variety of media channels and settings. To achieve this Tribe created a visual template for the work that reflected the school’s brand while simultaneously integrating social media and digital motifs, conveying complex information and eliciting an emotional response in viewers.

The Tribe team contributing to the work was led by Account Director Jon Huberth and Executive Producer Barbara Hennessy. The main campaign film was directed by Felicia Jamieson, produced by Alexandra Beni and written by Steve Eder, a five-time Emmy winner for his work in broadcast television. The commercials were directed by Glenn Holsten and written by Robert Shaffron. Michael Chomet was Editor and Visual Effects Director. All post production and graphics were done in-house at Tribe’s production facility in New Jersey.

About Tribe Pictures
Tribe Pictures (www.tribepictures.com) is an award winning production agency based in Chatham, New Jersey that specializes in strategic video and film solutions for Fortune 500 corporations and leading colleges, universities and non-profits. With a mission of “humanizing the most successful companies in the world,” Tribe has created compelling content for such household names as Coty, American Express, CIT, Tyco, Hamilton College, Hess, etc. The company brings subject-matter and storytelling expertise to areas such as culture change, human resources and investor relations, and is known for its work with corporate CEOs. Founded by CEO Vern Oakley, Tribe’s work has been recognized with Telly Awards, CINE Golden Eagles, Aurora Awards, CASE Awards and many other industry accolades.